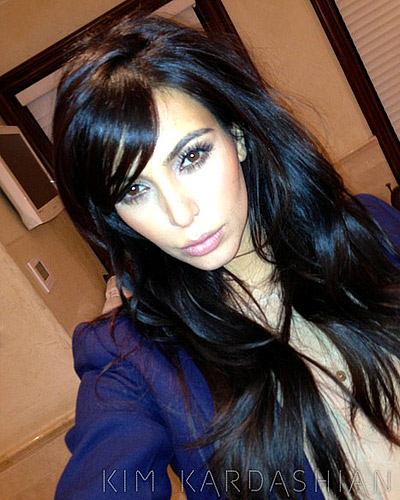 For years, Kim Kardashian has flirted with the idea of making the ultimate hair commitment. Is it a change in color? No, Kimmy’s done that (and thankfully she’s back to her natural brunette). No, Kim finally made the big leap and got….bangs! Any woman who’s had bangs can tell you that it really is a huge commitment. Why? Because if you get sick of them, it takes what seems like forever to grow them out.
Not everyone can pull off bangs, either, but Kim Kardashian makes it work. She decided to opt for long, side-swept bangs that frame her stunning face and really emphasize her huge brown eyes. The effect is quite flattering.
Back in December of 2012, Kim Kardashian faked everyone out by making them think she’d already gotten bangs. She later confessed to her millions of Twitter followers that the bangs were just a clip-on thing she did for a photo shoot. Not anymore! Apparently, Kim really, really liked the look. On Monday, she posted a Twitter photo with a seriously pouty face, telling followers, “I cut my bangs for real!”
Is there any doubt that Kim Kardashian is one of the most famous women in the world? When she gets bangs, it’s breaking, headline news! Hopefully she’s happy with the new look, because if not, she’s going to have to deal with the awkward bangs-growing-out phase. Combine that with a major pregnancy bump and it could be disastrous.