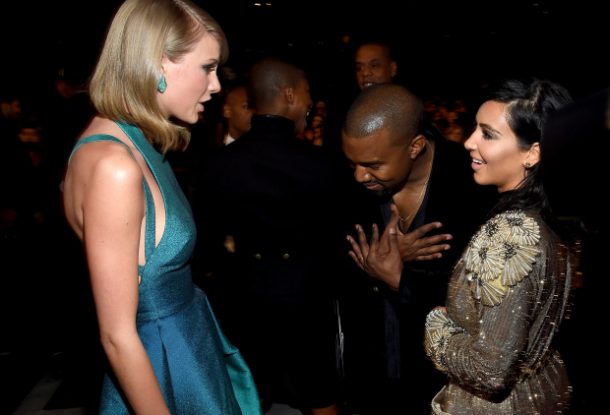 Kanye West’s song and video Famous has made a lot of fuss about them. In this song there are names of some celebrities, including Taylor Swift. 26-year-old Taylor is outraged that she was mentioned without her consent. However, Kanye and his wife Kim Kardashian claim that Swift was aware of it and even took part in the creation of the track. In an interview with GQ a month ago, Kim said: “She knew about the release of this song. But she wanted to pretend that it’s a surprise… I swear my husband is insulted so often, when, in fact, he does everything by the rules.”

Swift’s representative found Kim’s charges rude and inappropriate. The reality star decided to answer it as well. “I never say nasty things about anyone publicly,” said Kardashian to her sister Kourtney in the new issue of the reality show “The Kardashians Family “. Especially in an interview. But I just couldn’t keep from saying it. I wanted to defend Kanye.”

Kim added that Taylor’s acting like the victim since 2009, when West interrupted her speech at the MTV VMAs: “It’s a way to make herself a victim. The first time it attracted a lot of attention to her. But I don’t think he should be punished for this act up to this day.”