Is it possible for Kim Kardashian to get through a single week without major things happening? First, it was the news about two possible Kanye West sex tapes being shopped around. And now? It’s some freaky person who sent a handwritten letter addressed to both Kim and sister Kourtney Kardashian’s baby daddy, Scott Disick.

The letter arrived at Disick’s New York City restaurant, Ryu, and it’s so bizarre that Kim and Scott both quickly turned the letter over to authorities. Now, the New York City Police Department is investigating!

What the heck did the letter in question say? It was basically instructions to set up a meeting with both Scott Disick and Kim Kardashian at the Little Ferry Public Library in New Jersey. The person who sent the letter claims to be a Kardashian insider, having booked “gigs” for both Kim K. and her boyfriend, Kanye West.

Obviously Kim didn’t know who this person was, because she and Scott acted fast in getting the cops involved. Hopefully this person didn’t mean Kim Kardashian or Scott Disick any harm, though the sender seems a bit unbalanced. He (or she) wrote detailed instructions on what Kim should wear to the meeting, saying “You can wear all white. No makeup ok.”

The letter isn’t exactly threatening, and it could very well be a prank of some sort, meant to get attention from a celebrity (or celebrities, in this case). No doubt it’ll be part of the Kim and Kourtney Kardashian Take Miami reality show though. Intrigue like this makes for excellent reality TV viewing! 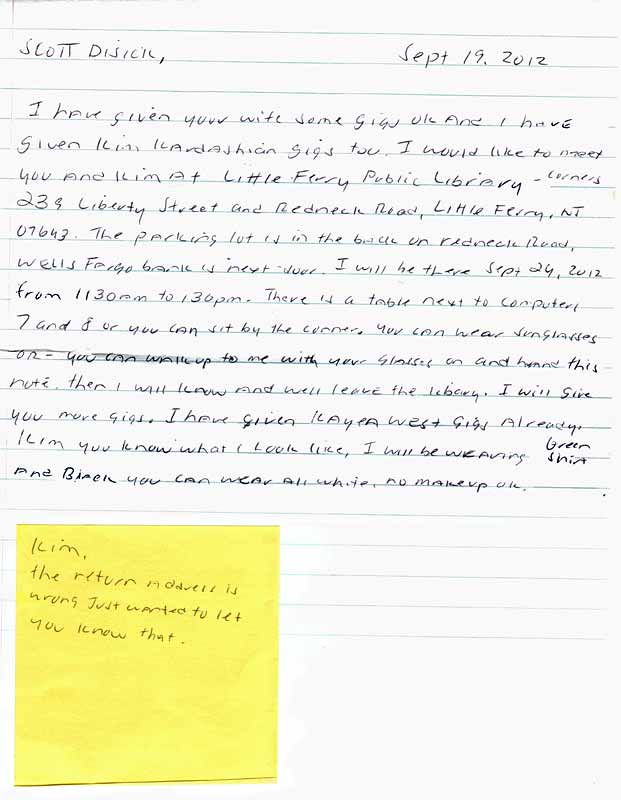