Despite numerous reports that suggest Kim Kardashian and Beyonce are feuding, it’s simply not true. Supposedly Bey was furious with Kim for trying to steal Jay-Z’s limelight by approaching director Ron Howard and attempting to secure some screen time in his Jay-Z documentary. 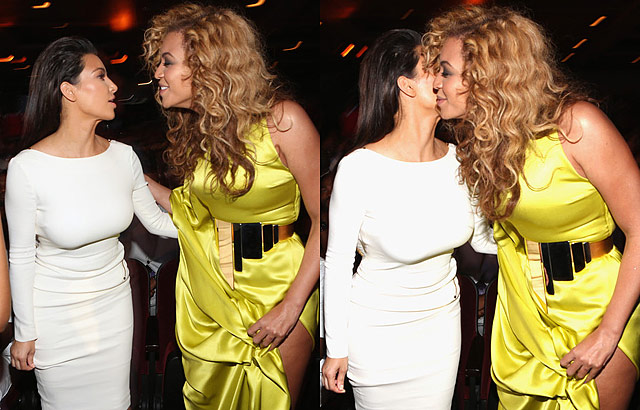 Does that sound like something Kim might do? Possibly. Did she actually do it? No, at least according to a source close to Kim K. and Beyonce. The source told the Huffington Post that Kim and Bey are not feuding, and that they “have gotten along perfectly since the first day they met.” This same source also claims that Kim never approached Ron Howard with designs of getting on camera in the Jay-Z documentary.

It’s kind of difficult to believe that Kim Kardashian wouldn’t want to get as much camera time as possible at any event, especially if she was feeling ignored and/or insecure. It’s not unreasonable to think that even the mighty Kim K. might feel a little slighted when she’s around the likes of Jay-Z and Beyonce. Both have worked extremely hard for the fame they have — Kim just made a sex tape to get famous!

Are Kim and Beyonce really hating on each other? It’s impossible to know for sure, at least at this point. If they are, however, you can bet something will eventually come to light.