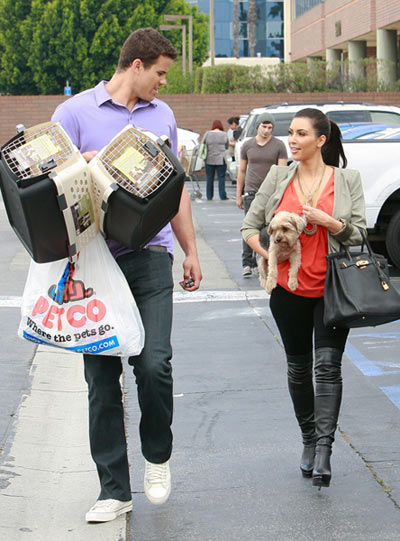 The saga that is the Kim Kardashian and Kris Humphries divorce just keeps getting more and more complicated. It almost seems impossible for this story to get any stranger, but it just continues to wind and twist and twist and wind, seemingly endlessly. To refresh your memory (as if anyone needs it): Kim K. wants a divorce and Kris H. won’t give it to her.
Why? Kris Humphries wants an annulment, on the grounds that the marriage was fraudulent to begin with. It’s as simple as that, and as complicated as it can possibly be right now. People magazine cites an anonymous source as saying that Kris is adamant that he’s not going to divorce Kim, because he’s always maintained that he’d only marry once. Well, if that was his one shot, it sure was a bad one, wasn’t it?
Apparently, Humphries believes that Kim Kardashian “…cheated him out of the chance to have a real, loving marriage.” Did she though? Wasn’t Kris an equal participant in the wedding? Didn’t he realize he was marrying a Kardashian? Their wedding was an E! special, for goodness’ sake!
The bottom line here is this: Kim Kardashian isn’t going to back down, and neither is Kris Humphries. It’s a standoff, celebrity-style. Who has more to lose as this divorce mess drags on? Definitely Kim. She’s having a baby this summer with Kanye West, and no doubt she doesn’t want to be married to another man when she gives birth. Kris? He’s free as a bird. He’s got enough money to have a nice lifestyle, thanks to his NBA gig, though no doubt he’d be happy to take some of Kimmy’s millions. Still, Kris can hold out, and it looks as if he will.