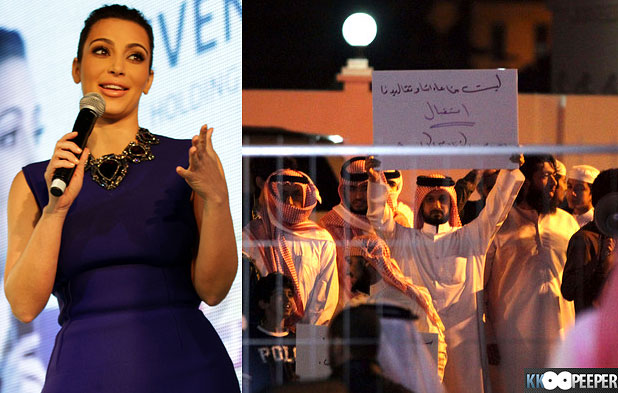 Kim Kardashian’s big trip to the Middle East, specifically to Bahrain, is making headlines — but not good ones. Last week, Kimmy took off for Kuwait and Bahrain on what she called an “educational” trip to the area. Oh, and while there, she was also promoting the opening of a milkshake store or two. Because really, who doesn’t want a Kardashian endorsing their product?

Things were going okay during the Kuwait leg of Kim Kardashian’s Mid East trip. She attracted good crowds for the opening of the Millions of Milkshakes store in the Kuwait City late last week. It’s when Kim K. arrived in Bahrain that all hell broke loose, so to speak. What happened?

In a nutshell, Kimmy K. basically caused an angry riot in Bahrain’s capital city of Manama. It seems the locals are not exactly Kardashian fans, and that’s putting it mildly. Groups of angry demonstrators held protests over Kim Kardashian’s appearance at the Millions of Milkshakes store opening, and at one point, reports say stun guns were used to disperse the angry masses.

What had everyone so furious? It seems that some Bahrainis object to having Kim Kardashian in the country, because they believe she has a “bad reputation.” Gee, what could possibly make them think that? Oh, wait…

In either case, Kim Kardashian left the Middle East on Sunday, but she apparently hopes to return at some point. She seemed to enjoy herself and made no mention of the protests via her Twitter account – though she did post some photos and a video (with some camels).