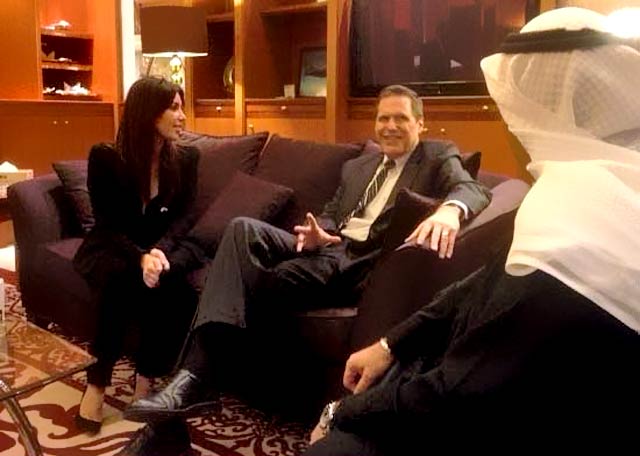 The long anticipated Kim Kardashian trip to the Middle East is officially underway. Kimmy was in Kuwait this week, to help launch the new “Millions of Milkshakes” at a huge mall in Kuwait City. She also planned a stop in Bahrain as well. If Kim wants to learn more about the region, she’ll have time, but only in-between promotional appearances, of course.

To be fair, Kim K. did meet with Matthew Tueller, the U.S. Ambassador to Kuwait, during her trip. Wonder what they discussed? Probably not the Kardashian reality shows or high fashion. Tueller doesn’t seem the type for that. If Kim is serious about learning more about the Middle East conflict(s), having a chat with a diplomat is a good start. After her major gaffe about the Israel/Gaza conflict a few weeks ago, it’s clear she has some learning to do.

Apparently, Kim Kardashian has abandoned all sense of fashion on her trip, because the dress (term used loosely here) she wore to open the big Millions of Milkshakes store in the Kuwait City mall is just insanely tacky. The white dress had some bizarre cut-out thing going that honestly made Kimmy look like a character from a 60’s ‘Star Trek’ episode. Earth to Kim: Pick better outfits during this trip, please. Everyone in Kuwait’s going to think Americans have zero fashion sense!