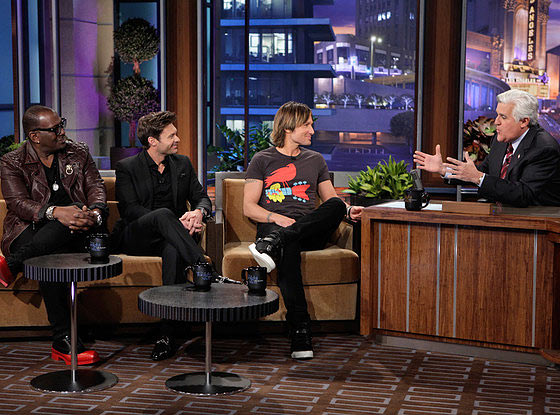 Ryan Seacrest is speaking out about Kim Kardashian’s pregnancy. During a recent appearance on late night TV, the executive producer of all the Kardashian E! reality shows let everyone know that yes, Kim and Kanye’s pregnancy will be closely followed on ‘Keeping Up With the Kardashians.’

Is anyone surprised by this news? Probably not. As to how far and how much we’ll get to see of Kim Kardashian’s pregnancy, including the possible delivery of her first child, it’s not clear. Ryan Seacrest seemed to indicate that while ‘Keeping Up’ will certainly follow Kim K. (starting at about four and a half months when filming begins), he had absolutely no plans to film the baby’s delivery.

Seacrest might just be joking around about not being in the delivery room when Kim Kardashian and Kanye West’s baby is born, but keep in mind, Kourtney Kardashian’s 2012 delivery of baby Penelope was filmed — and shown. Not everyone was happy about that, but will Kim K. follow suit and also film her baby delivery for all the world to see? Should she? And, if Kanye West is (as rumored), trying to get a little more OUT of the spotlight, wouldn’t he object to having his child’s birth filmed for a reality TV show?