33-year-old Khloe Kardashian is a soon-mother-to-be. Now the star is on the last months of pregnancy. So as to remember this wonderful time, Chloe turned to the star photographer Sasha Samsonova and asked her to give her a luxury photo shoot, one photo of which is posted in her Instagram.

In the black and white picture Khloe with hair and makeup is posing in her underwear. Not all the fans appreciated such frankness.”And after that, you’re still asking us not to invade your privacy?”, “Don’t try too hard, sweetheart, you’re not Kim, ” asked some of star’s followers. Most, however, was delighted with the new photos of hers: “You are gorgeous”, “Amazing”, “Like an angel”, “I would like to look like this during pregnancy.”

Despite the fact that some Khloe’s fans predict the birth of a boy by the form of her belly, the star is one hundred percent sure that she’s having a girl. That is why on the occasion, arranged in honor of the future child, the whole decor was made in soft pink tones, and the guests were photographed against the background of a huge wall of roses. The fans regarded frequent appearance of this flower in Khloe’s photos as a hint for a future girl’s name. “Rosa is a very nice name, but it’s not on my list,” Chloe denied that assumption. 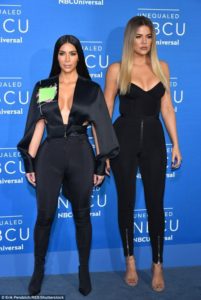